Tickets
Story
Dolley Madison in Popular Culture
6 Minute Read
Dolley Madison the symbol was very different from Dolley Madison the historical figure, although both speak to the American yearning for identity.
During her lifetime, Dolley Payne Todd Madison was a partner to James in multiple ways—one half of a loving marriage, an effective political connector, and a hostess so able that she would set the tone for hospitality not only in Washington but all over America. Her actions went a long way towards improving public perception of James Madison as well as making inroads for her husband among other politicos of the day. Today, we inherently understand that a spouse's popularity has significant impact on a presidential candidate’s chances with the public, but it was Dolley Madison who showed just how important a president’s partner can be.
Dolley Payne Todd’s charms were legendary among her circles, beginning with the Philadelphia Quaker community in which she lived with her parents and then her first husband, John Todd. After the death of Todd and their youngest son, William—on the same day from a yellow fever outbreak—the young widow broke with the Quakers to marry James Madison. Her new husband had already made a name for himself as a statesman, but it was Dolley’s particular skill with people that turned their drawing room into a place of political connection.
James took his place behind the presidential tiller in 1809. Once installed in the White House, Dolley quickly began to make changes, working with architect Benjamin Henry Latrobe to select stylish furniture and interior decor, and turning the sometimes stodgy, sometimes too exclusive gatherings of presidencies past into welcoming, graceful affairs. If James’s political philosophy emphasized the importance of the individual, Dolley made each individual visitor personally feel that importance. Her unique brand of hospitality was emulated by a very young nation anxious to craft an identity. 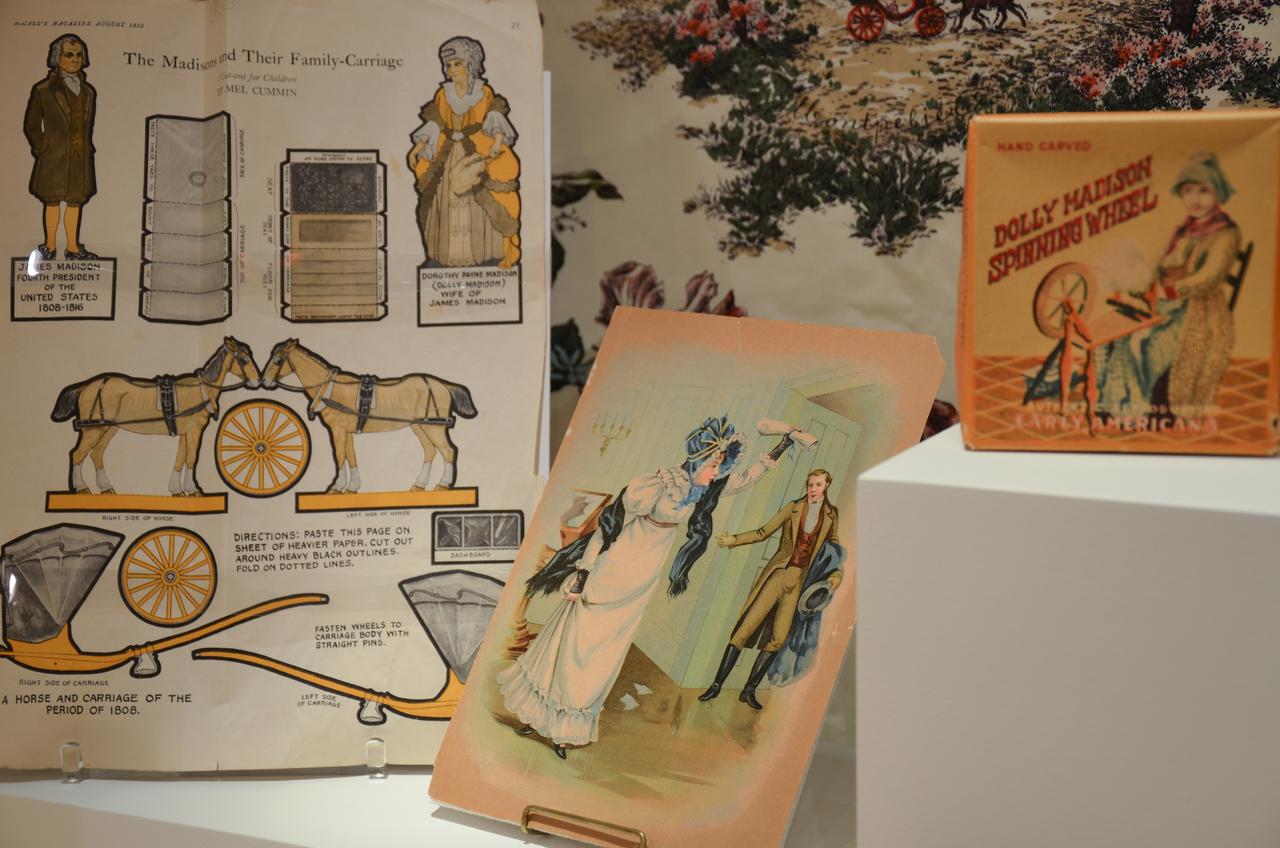 Dolley Madison was introduced to children as an American to emulate, appearing on all manner of toys, games, and dolls.
The nation’s admiration didn’t end with Dolley’s death in 1849 or the impressive funeral held for her in Washington. Her value as a symbol would stay strong well into the following century.
Dolley Madison’s name and image began appearing on manufactured goods in the 1880s. American industry was entering an era of mass production, producing more and more standardized products for the table and home. And with that surge of manufacturing came a need for effective advertising as well as what we’d today call “branding.”  The recent Centennial Exposition had revitalized interest in Colonial style—America was starting to see an influx of immigrants from Europe, and it was hungry to preserve (or to create) its own identity. And who epitomized the domestic aspects of early American living more than America’s most famous housewife?
The New Dolly (many companies ignored the “e,” although she spelled her name “Dolley”) was a safer, less complex version of the old. She appeared on china plates, in doll form, on cigar wrappers, and, later, on packaging for cakes, ice cream, and dairy products. Her name was used to sell wine, silver and dinnerware patterns, bedspreads, stockings, hats, and even watches. To Americans, “Dolly Madison” implied grace, elegance, and a national pride.
Pairing Dolley with domestic items simplified her role in America’s history and made her less threatening as a female—instead of acknowledging her role in helping her husband’s politics, Americans were happy to put her in the safer space of a hostess who lived to serve. Likewise, the nation chose to remember her Quaker background instead of her slaveholding adulthood.
It didn’t take long for Dolley’s physical image to become detached from reality. She sometimes appeared as a blonde, sometimes in a Betsy Ross-style cap that was stylistically to early for her, and sometimes even in a Marie Antoinette wig. A likeness to the historical Dolley wasn’t really necessary anymore—just her name alone was enough to imply that the product was fashionable, American, and domestic goddess-approved. 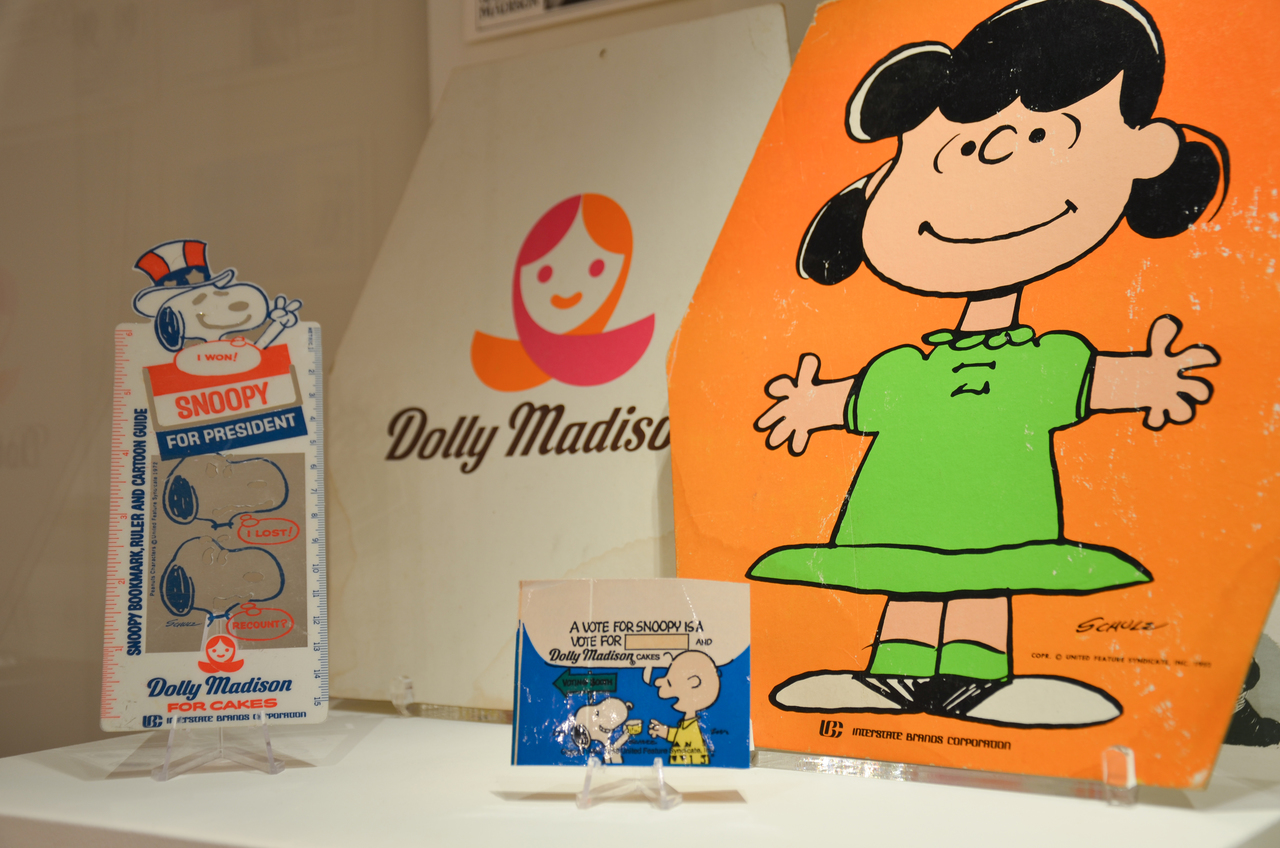