Open Saturdays and Sundays 9AM-3PM. We strongly recommend purchasing tickets in advance.Visitors Must Wear Masks Indoors.
Story
What Lies Beneath
Montpelier archaeologists use new technology to uncover hidden history
10 Minute Read
From Archaeology at Montpelier
Most of us know Montpelier as the home of James Madison, 4th president and "Father of the Constitution," and his wife, Dolley, sociopolitical powerhouse and America's First, First Lady. What many people don't know, and what is often left out of the historical narrative, are the stories of the enslaved community who lived and labored on the 2,650-acre, rural Virginia plantation. The stories of the enslaved are literally below the ground thanks much of the property being untouched since Dolley Madison sold the estate in 1844. With this sale, slave quarters, work areas, and fields were abandoned and in many cases grew up in woods. The archaeology department just received a new tool that allows these sites that are otherwise invisible, to be seen in details we never thought we could attain.
Montpelier aerial. Courtesy of the Montpelier Foundation
In order to better understand the lives of the enslaved community, and to more accurately and authentically tell their stories, Montpelier archaeologists recently acquired a new tool called LiDAR (light detection and ranging), that allows them to uncover subtle terrain changes on that are present on the ground surface but invisible to the naked eye. It is essentially like acquiring x-ray vision so we can see features such as historic roads, field edges, and even plow furrows. Over the past thirty years, archaeologists have found hundreds of sites across the property such as slave quarters, barns, and work sites; now we can connect these historic sites with the location of fields, historic paths and road traces. This allows us to literally walk in the foot steps of the enslaved across the landscape.

What is it?
LiDAR technology works similarly to radar to create a highly detailed terrain map. It works by sending millions of light pulses from a camera fixed to an airplane down to the earth. These light pulses reflect off anything they hit on the ground (trees, ground surface, buildings) and are returned to the camera to be measured. In areas where there are trees and bushes, about 1/2 of these light pulses make it to the ground, and these can be used to create a surface map. What results is a 3-D map from which the computer creates an incredibly detailed map of the ground surface --even in the woods-hence why LiDAR is like x-ray vision!

LiDAR at Montpelier
Initial LiDAR surveys were conducted in April 2018 and we worked with the University of Arkansas to process the data into detailed maps in which ground features were visible. Staff from the Center from Advanced Spatial Technology (CAST) took all the data and created shaded maps of the 3-D ground surface that all subtle details to be seen. These hillshade maps are essentially akin to holding a flashlight at a low angle to show relief details--it all shows up in the shadows. These shaded maps are particularly sensitive to having linear changes (such as fencelines and plow furrows) be seen. 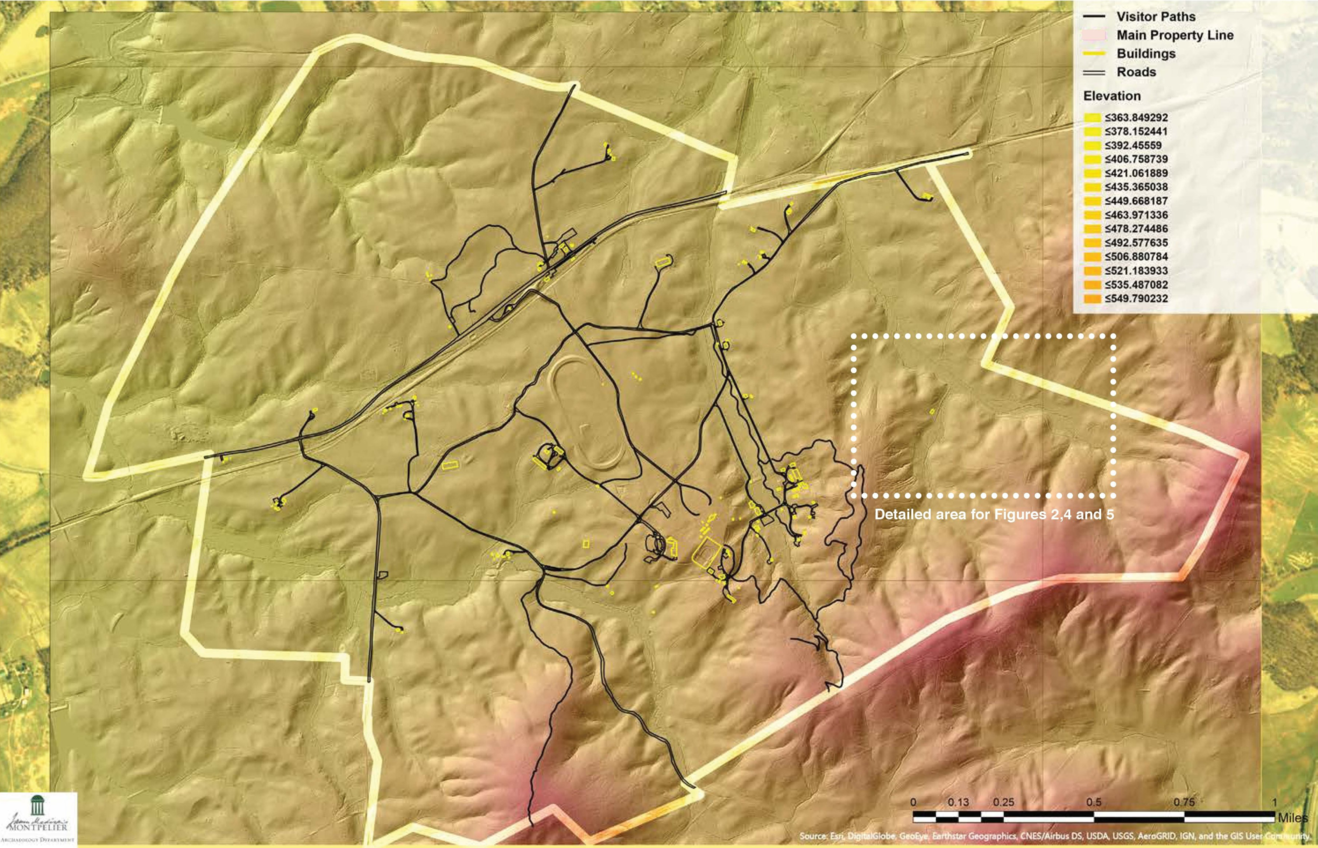 Property map showing LiDAR imagery overlain with elevation data.
What LiDAR allowed us to do is connect historic sites we have found through archaeological survey (slave quarters, barns and other work areas dating to the Madison Era) with each other through the roads and trails revealed by LiDAR. In addition, the fields that the enslaved workers toiled were visible through the fencelines and even plow furrows seen through the LiDAR. In essence, we were able to obtain a complete picture of landuse. Almost as good as if a map dating to the 1820s had been located that showed all of these features on the landscape--but even better as the LiDAR is accurate to within an inch!

This initial survey helped archaeologists understand how the landscape has changed over time and what features existed hundreds of years ago. According to Matt Reeves, Montpelier’s Director of Archaeology and Landscape Restoration, the technology is “a dream come true for me; this is Christmas in April!”

"This is Christmas in April!”

How is it used? 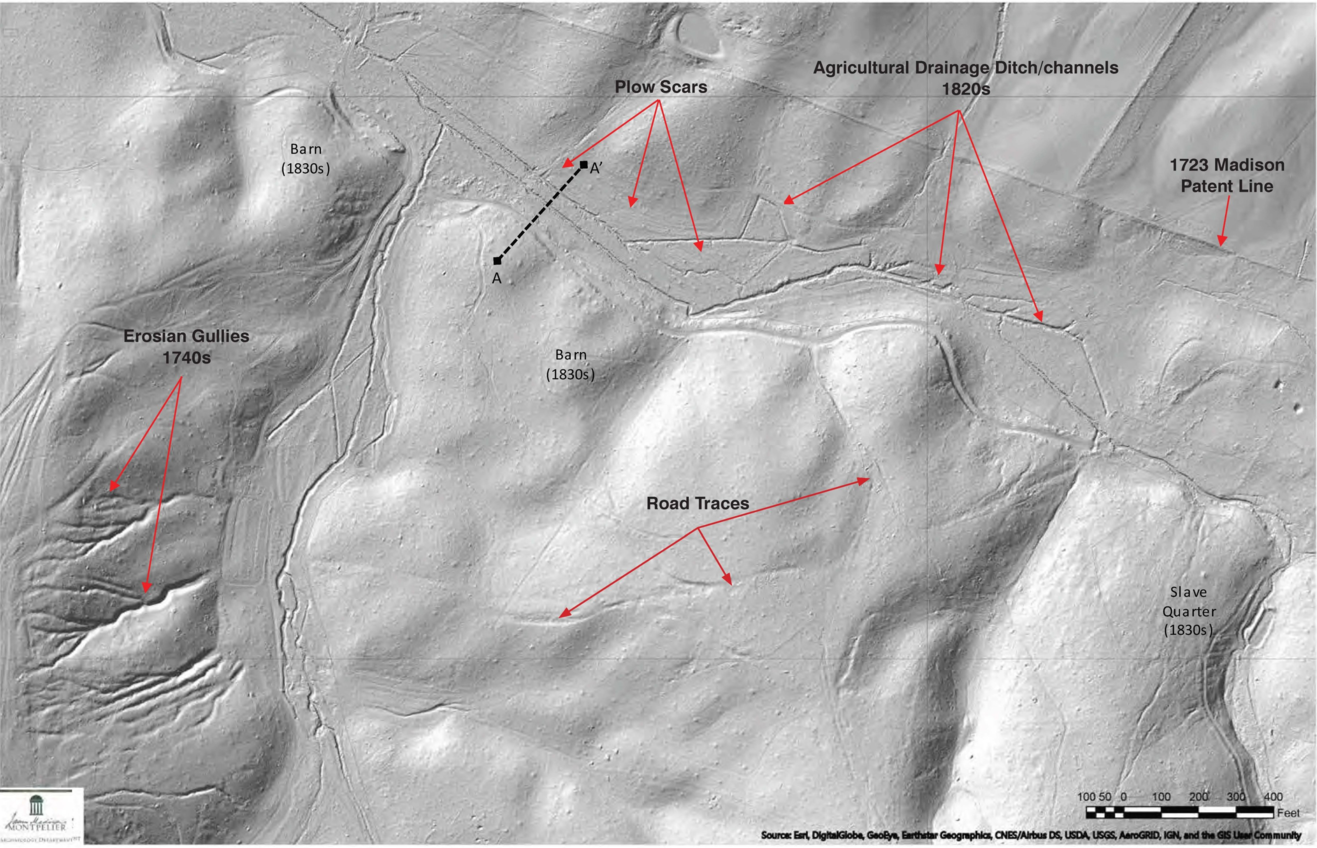 Madison-era historic features against the "bare earth" LiDAR imagery. Red areas are archaeological sites discovered through metal detector surveys.
After the hillshade model was completed, the Montpelier team digitized the landscape features evident in the wooded landscape, linking them to known information on the property. The previous winter, archaeologists employed Geographic Information Systems (GIS), software to create a geo-database in which mapped items could be linked to data. These items included property lines from deeds that could be attached to historical data on land ownership, locations of archaeology sites found over the years of survey, metal detector survey data (especially location of individual hits), location of excavation units, and historic maps and photos.

Subtle linear features are made more visible across bird's eye view of point cloud rendered as surface.
Bringing the LiDAR imagery together with information from GIS allows us to pair historical data and archaeological finds with features found through the LiDAR maps. An example of this synchronicity is the multiple linear field lines evident across the property. By matching deed property boundaries with these features, we can give these field lines a date or origin. This process of dating field lines is especially rewarding in the wooded areas of the property where agricultural activities ceased over 160 years ago.

Montpelier is unique because the landscape has remained relatively intact since Dolley Madison sold the property and the enslaved community members in 1844. For the remainder of the 19th century there was no longer a labor force on the property to keep fields open and in cultivation. The majority of the fields and pastures were abandoned and, by 1900, two-thirds of the acreage was woods. Even after the duPont family purchased the property in 1901, few fields were actively plowed, and woodlots remained un-impacted throughout the 20th century. Consequently, much of the Madison-era landscape features remains unchanged. Luckily, the road traces, field edges, ditches, mounds, depressions, and even plow furrows are present on the forest floor and in the fields. 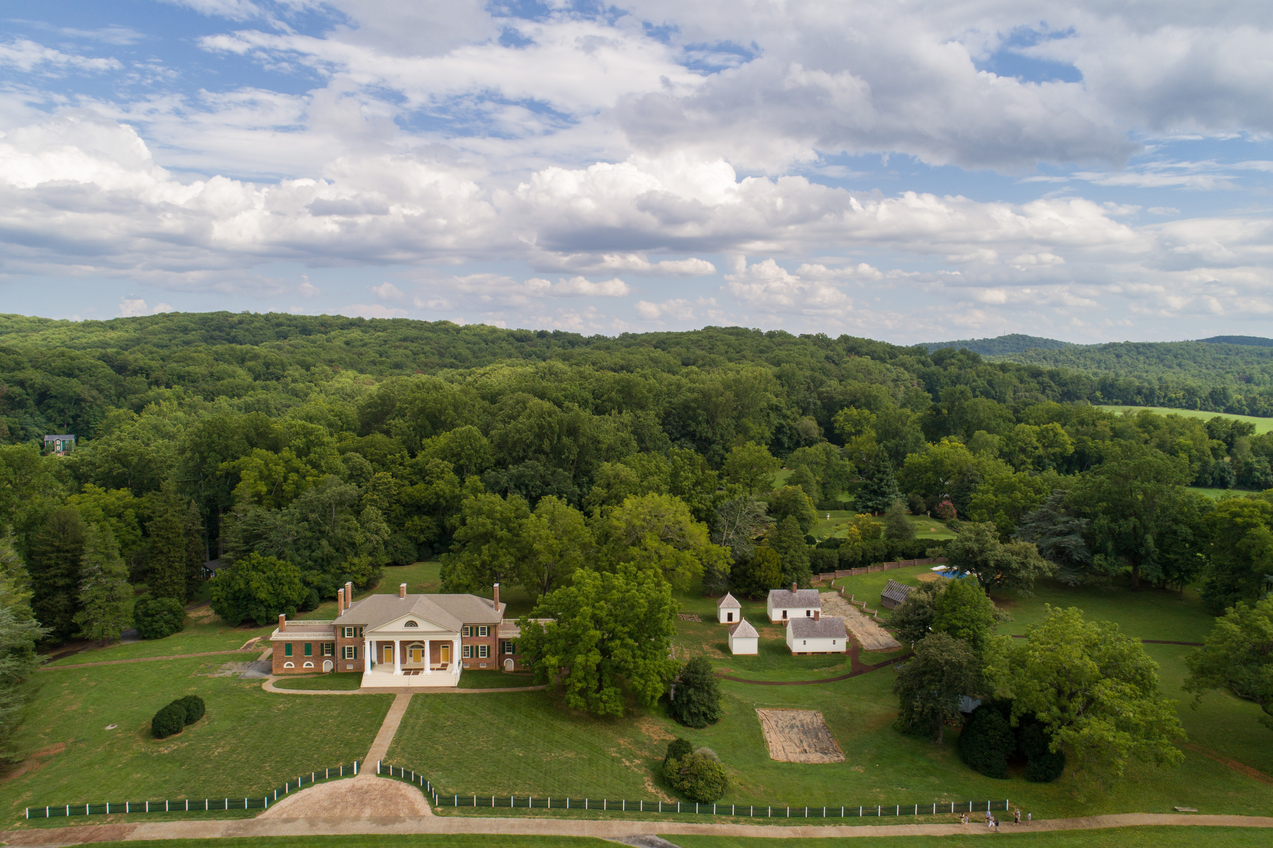 Montpelier property in 2018. Very little of the area near the Madison house was disturbed by home owners, leading to rich archaeological deposits and preserved Madison-era landscape features. Aaron Watson, courtesy of the Montpelier Foundation
Most of these features, however, are obscured by vegetation. This is where LiDAR surveys become a useful tool.
“What we’re able to do is capture some really subtle features on the landscape that nobody has known about since the 1820s when the enslaved community lived and worked on the plantation," states Reeves. "what is most complelling is capturing the footpaths of the enslaved community that connect sites - the road networks that were here during the Madison era, and then reconstruct them.”

Combining LiDAR with other archaeological practices
Montpelier archaeologists were also able to use the LiDAR data to re-examine a 580-acre area in the East Woods that had undergone metal detector surveys several years prior. The surveys had located what appeared to be an early 19th-century plantation farm quarter consisting of several barns, a slave quarter, and potential overseer’s house. Although several road traces had been located, field locations had not been determined. LiDAR data revealed that the original 1723 patent line for the property was marked by a linear trench than ran for one and one-half miles, as well as an array of roads, trenches in lower areas, erosional gullies on slopes, and subtle linear features that appear to be plow furrows. These features inform us about the landscape that spans Madison’s lifetime. 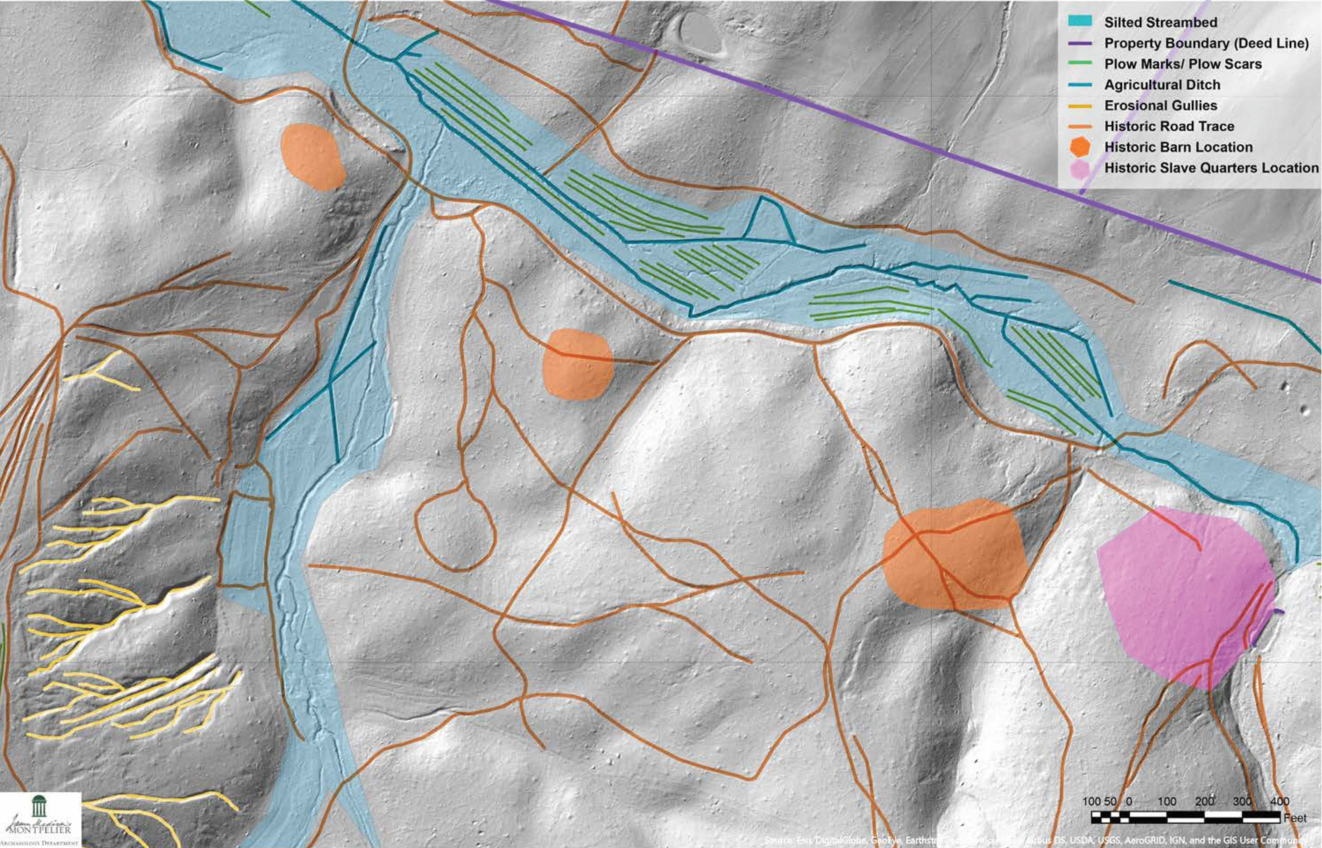 Digitized Madison-era historic features against the LiDAR imagery. Orange areas represent archaeological sites discovered through metal detector surveys.
The presence of these erosional gullies across the property - as seen via the LiDAR survey - suggests that in the 18th century, all of the land was worked for tobacco cultivation. Early tobacco cultivation entailed “girdling” trees (cutting the bark to kill the tree), then hoeing the soil into mounds where the tobacco was planted. Once cleared of tree roots, these fields were then plowed, often in linear patterns up and down the slope that provided a channel for water create torrents of water to wash soil downhill. Such practices left the soil vulnerable to erosion, and thousands of tons of soil washed into stream beds. Rather than abandon the areas made unsuitable for agriculture from the soil that had washed away, history tells us that Madison directed his slaves to work the bottom lands where topsoil had accumulated. The evidence for these silted stream beds being worked agriculturally is derived from two features evident in the LiDAR surveys: long linear ditches that appear to have been dug to redirect running water, and subtle linear features that appear to be the last set of plow furrows cast into these areas. 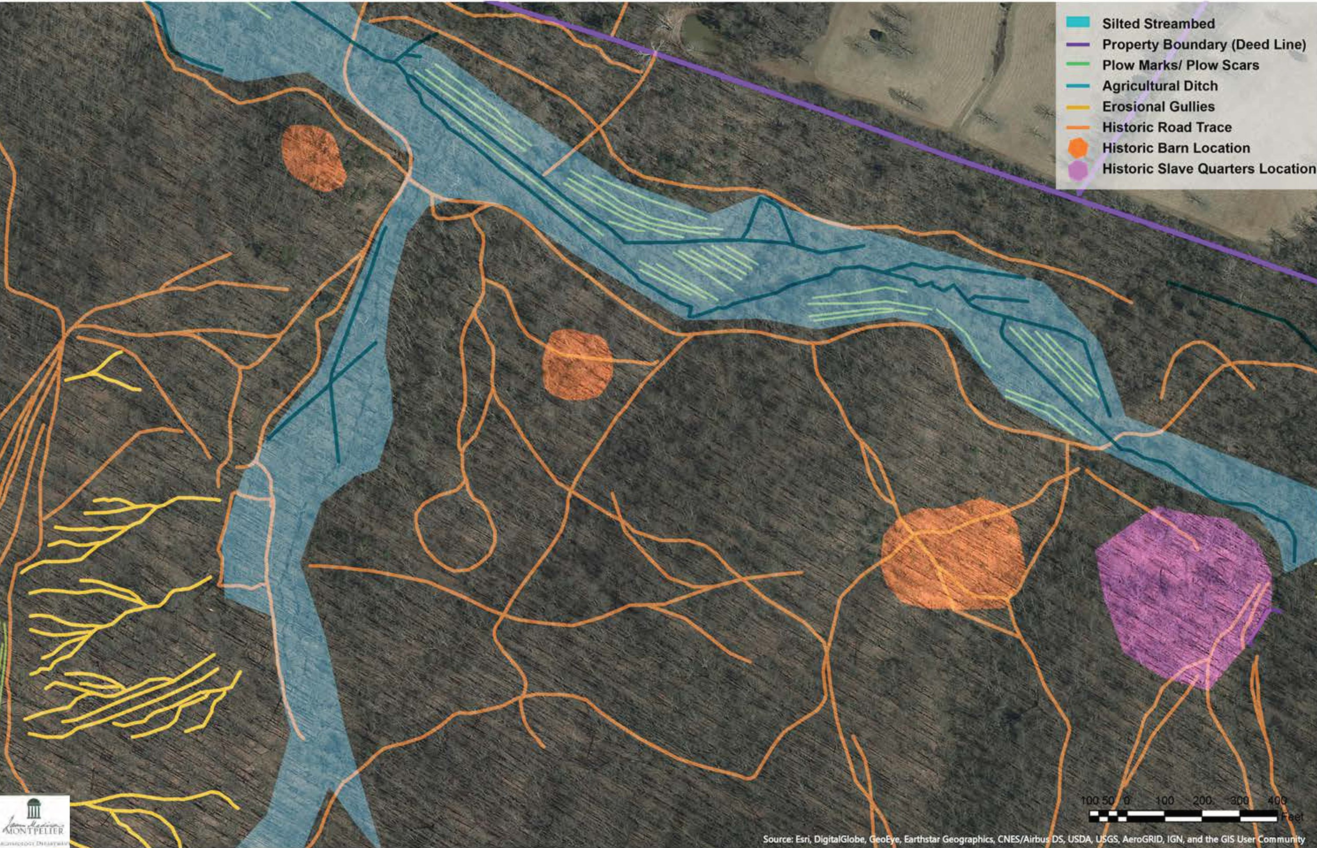 Digitized Madison-era historic features against aerial photograph. Orange areas represent archaeological sites discovered through metal detector surveys.
The combination of LiDAR survey with other archaeological practices and historical analysis yields interesting and in-depth results about the landscape and the lived experiences of those who lived on, and worked, the plantation.

The Impact of Data on Landscape Restoration
Through their work, Montpelier archaeologists have been able to discover the work areas, living spots, and buildings that made up the Montpelier plantation. LiDAR provides the missing links that connect these sites, whether they be roads, foot paths, field lines, ditches, mounds, etc. LiDAR gives the unprecedented opportunity to begin to connect human actions to landscape features.

The surveys serve as a permanent record of the ground conditions to date, and will be used as a reference tool for the foreseeable future. As more surveys are done, data will continue to be added to the GIS map that will provide more clues as to the origin of many of the features picked up through LiDAR. Ongoing metal detector surveys that identify the location of historic sites across the property will more fully flesh out these features, and when combined with LiDAR analysis will paint a clearer picture of the movement of the enslaved community throughout the property. 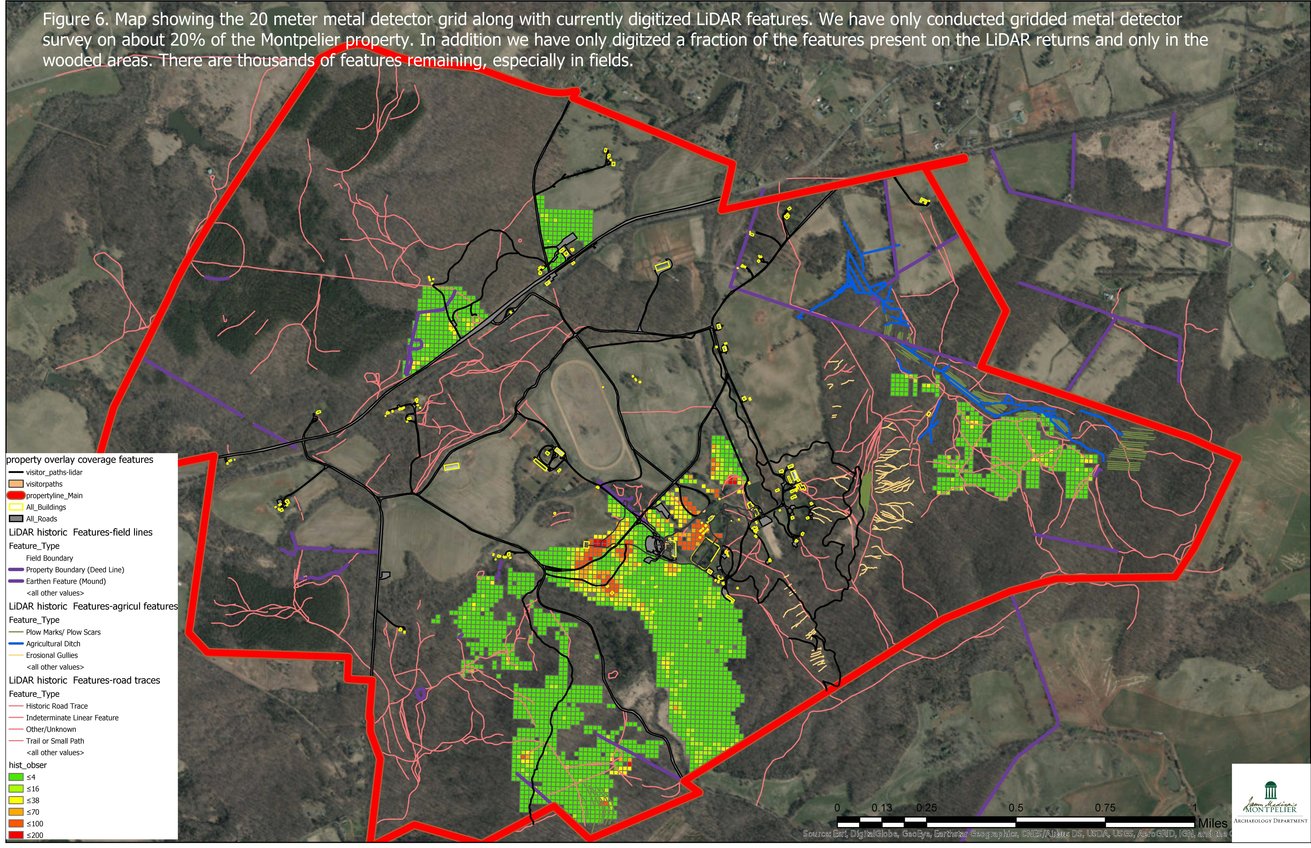 20 meter metal detector grid along with currently digitized LiDAR features.
As phone and GPS/internet technology continue to improve, visitors will have new opportunities to interact with the landscape, both for contemporary and historical learning opportunities. Eventually, visitors will be able to take photos of landscape features and associate them with digital renderings of these same features hundreds of years ago. Reeves says his team is just scratching the surface of what they hope to accomplish with the help of LiDAR. “Where you’ve got paths, it’s likely you’ve got other buildings that we haven’t found yet, so it’s just opening up a whole new window for all of this,” he explains. “What we want to do specifically if we have visitors using the landscape, walking on it, we want to have them use the same paths that the enslaved community would have used.”
The Madisons African Americans Enslaved Community House and Grounds South Yard Archaeology
Come Dig With Us
You Might Also Like
The duPont Family
9 Minute Read
Learn More
Montpelier Elects New Board Members
5 Minute Read
Learn More
Constitution 101: Robert Strauss
February 20, 2022
Learn More
Center For The Constitution
Evenings with the Experts: Social Media
February 17, 2022
Learn More
‘Structural Parity’ in Unprecedented Board Restructuring
8 Minute Read
Learn More
“Dinner for the Madisons”
5 Minute Read
Learn More
Archaeology Lab Analysis and Exhibit Curation
March 13 - 18, 2022
Learn More
Archaeology At Montpelier
Popular
Evenings with the Experts Series
9 Minute Read
Learn More
Madeleine Albright Interview
71 Minute Read
Learn More