Tickets
Story
The Life of James Madison
11 Minute Read
James Madison, Founding Father, architect of the Constitution, and fourth President of the United States, was born on March 16, 1751 at his mother’s home in Port Conway, Virginia, on the Rappahannock River near Fredericksburg. His parents—Nelly Conway Madison and James Madison, Sr.—couldn’t have known that their eldest child would have a major role in shaping the collection of British colonies they currently inhabited into a nation that would ultimately become a global superpower.
The Madisons lived in a relatively small plantation house called Mount Pleasant in Orange County, Virginia during James Madison, Jr.’s young childhood. In the early 1760s, the plantation’s enslaved labor force constructed a brick Georgian structure a half-mile away, and the Madisons moved into this house, later renaming the estate "Montpelier."
A naturally curious and studious child, James Madison likely began his education at home under his mother. He was the oldest of 12 children, although only seven would live to adulthood, and as the eldest son of a wealthy Virginia planter, Madison had a number of privileges that would allow him to hone his inquisitive mind. A distinguished Scottish teacher named Donald Robertson instructed young “Jemmy” between the ages of 11 and 16 at his school in King and Queen County. There, the eager pupil discovered a fascination for an array of subjects, including mathematics, geography, and both modern and classical languages, particularly Latin. His ability to dive deeply into ancient philosophy built a foundation for the future statesman’s influential ideas.
After some further preparatory study back at Montpelier under the Reverend Thomas Martin, James Madison chose to pursue his higher education at the College of New Jersey, which would later be known as Princeton University. Most prominent young Virginians, such as his future mentor and friend Thomas Jefferson, attended the College of William and Mary. But the Virginia college’s humid, coastal clime was thought to be detrimental to Madison’s health, so northward he went.
In 1771, Madison graduated with high marks in classical languages, mathematics, rhetoric, geography, and philosophy. Not satisfied with just those subjects, he became the college’s first graduate student, studying Hebrew and political philosophy under university president John Witherspoon, later a signer of the Declaration of Independence.

A Political Crusader and Natural Diplomat

James Madison was unsure what to choose as a vocation when he came home to Montpelier. In hindsight, a transition into politics seemed inevitable for Madison, who took a keen interest in the ways governments functioned—particularly the struggle between the American colonies and Great Britain. He started local, as a member of the Orange County Committee of Safety in 1774, before being elected to the Virginia legislature in 1776.
There, he began forming ties with Jefferson. The two would work closely in 1779, when Jefferson became Governor of Virginia and Madison served on the Governor’s Council. Madison next served in the Continental Congress from 1780 to 1783, gaining a reputation for thoroughly considered arguments and for bringing multiple interests together in coalitions.
By the time he moved back to Virginia to serve a second term in the legislature, Madison felt uneasy with the way that state governments were operating. He saw state legislatures as pandering too much to the whims of their constituents, rather than taking a more holistic view. As a result of this “excessive democracy,” there was unrest in many corners of the new country. 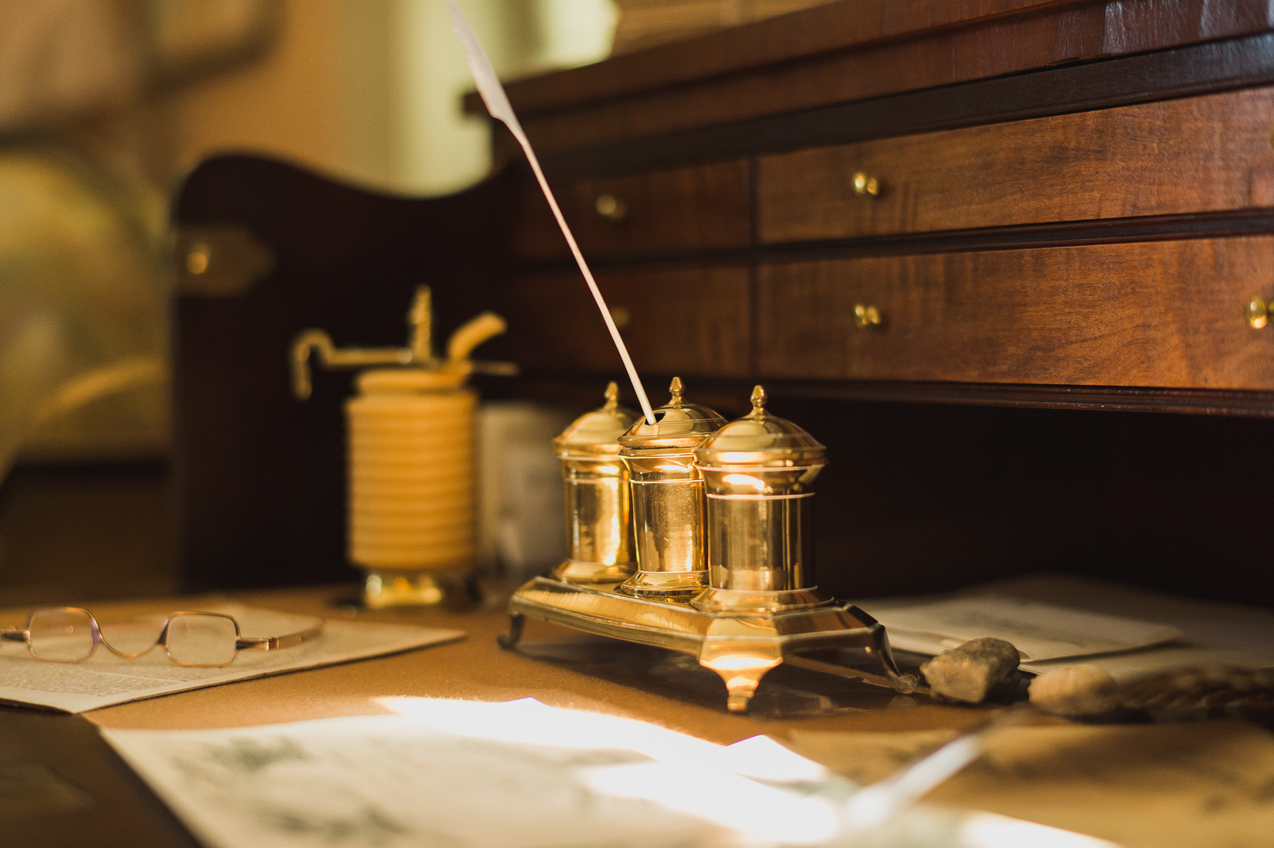 Madison did much of his research and writing at Montpelier.

The Father of the Constitution

With a largely powerless central government, 13 state governments passing too many laws that were rapidly changing and sometimes even unjust, it was starting to become clear that the Articles of Confederation, the agreement between the states created after the Revolution, just didn’t provide enough structure. The central government couldn’t pay its debts, and it couldn't require the state to contribute their share to comply with federal laws. The great American Experiment was in danger of failing.
In preparation for the 1787 Constitutional Convention, Madison drafted a document known as the Virginia Plan, which provided the framework for the Constitution of the United States. Madison, then 36, spent the months leading up to the convention in Montpelier’s library, studying many centuries of political philosophy and histories of past attempts at republican forms of government. His plan proposed a central government with three branches that would check and balance each other, keeping any one branch from wielding too much power. No such government had ever been created before, and Madison had to use all of his diplomatic skill to argue for his position. He also had to accept compromises to ensure that the Convention would produce a Constitution that all the states could accept.
The final Constitution—of which James Madison rejected being called the father, insisting until his death that it was the result of the efforts of many—still needed to be ratified. Madison, along with Alexander Hamilton and John Jay, penned a series of 85 newspaper articles in New York that addressed concerns and detailed how the Constitution would function, helping to sway the American people in favor of the new government. These “Federalist Papers” are still considered some of the most groundbreaking political philosophy of all time.
Madison returned to Virginia to join its ratifying convention, where he famously debated the great orator and Anti-Federalist Patrick Henry. Along with the other states, Virginia would go on to ratify the Constitution.

Author of the Bill of Rights

Initially, James Madison believed that a Bill of Rights was not only unnecessary, but potentially harmful. If we enumerated some rights but not others, would it imply that others weren’t included? Would a Bill of Rights carry any weight in the face of a despotic government anyway?
He ended up coming around to the idea when it appeared that the Constitution would only be ratified with the promise of a Bill of Rights. So Madison compiled a list of 19 proposals from the hundreds of suggestions that had come out of the states' ratification debates. A Congressional committee reworked those suggestions into 12 amendments, 10 of which would go on to be ratified by the states. Instead of becoming amendments worked into the body of the document as Madison had thought, the amendments were added at the end of the Constitution as a separate Bill of Rights.

In 1794, a young Quaker widow named Dolley Payne Todd (1768-1849) prepared to meet the esteemed statesman, James Madison at the request of her acquaintance Aaron Burr. She was 26 and had recently lost her husband and younger son in a yellow fever epidemic in Philadelphia, where her family had moved from their plantation in Hanover County, Virginia 11 years prior.
Dolley and the 43-year-old Madison married later that year. Because Madison was not a Quaker, she was expelled from the Society of Friends after the two were wed at Harewood, the plantation of her sister’s husband in what is now West Virginia. Madison would help raise Dolley’s surviving son, John Payne Todd (known as Payne), and the family lived in Philadelphia until 1797 when they returned to Montpelier.
At his father’s death in 1801, Madison inherited Montpelier and the 100-plus enslaved African Americans who came with it. Dolley Madison was once again part of a slave-owning family, despite the Quaker convictions that inspired her father to emancipate his own slaves after the Revolution. 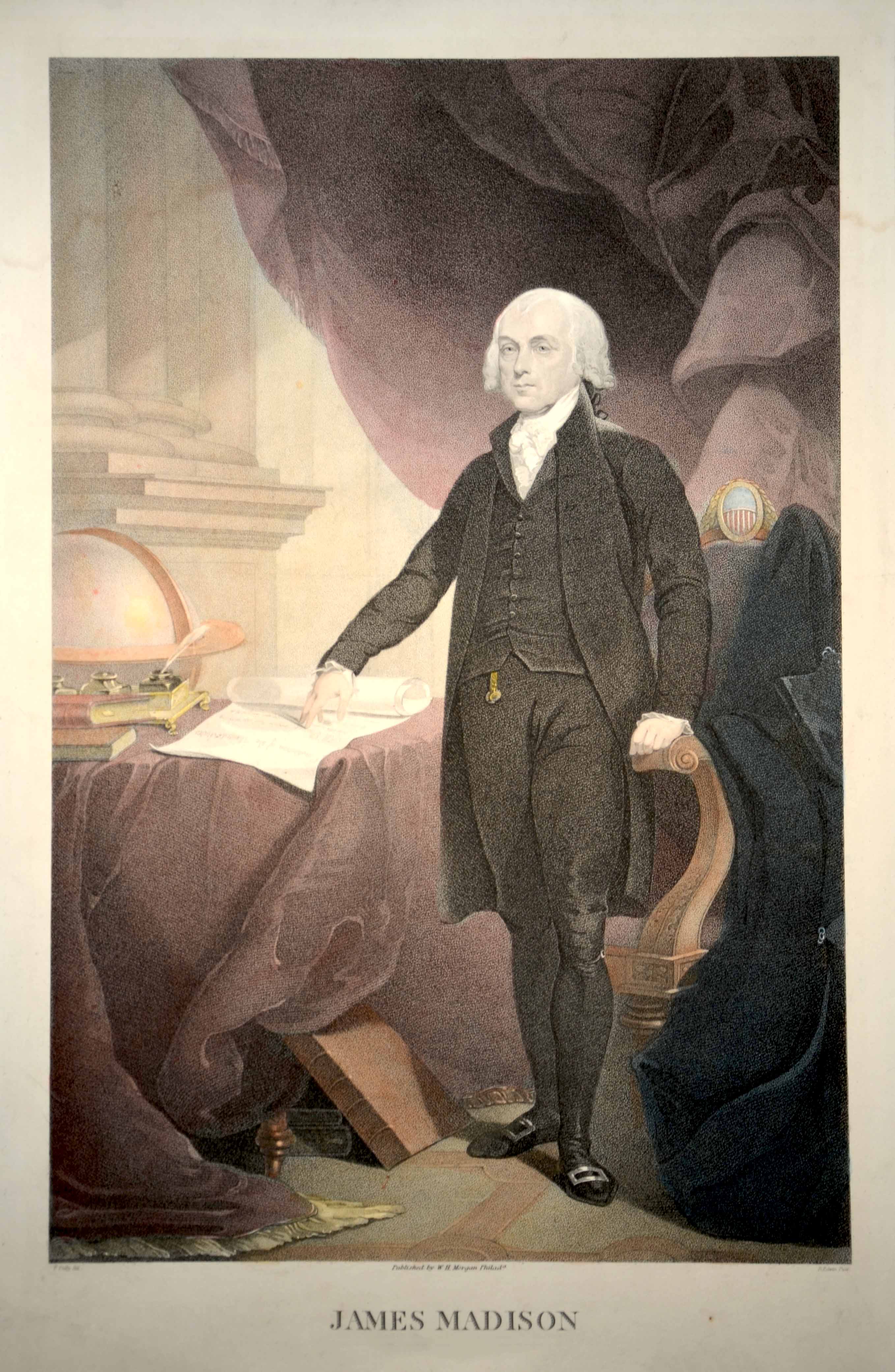 The Madisons Go to Washington

After serving in the first four Congresses under the new Constitution, Madison intended to retire from politics altogether, but when his friend and colleague Thomas Jefferson named him Secretary of State in 1801, the Madisons moved to Washington, D.C., the new nation’s new capital city. During Jefferson’s administration, Madison argued for America's shipping rights as a neutral party in the war between France and Great Britain and assisted in engineering the Louisiana Purchase.
When Jefferson’s time in the White House was coming to a close, James Madison was the clear choice for his party, the Democratic-Republicans.

James Madison easily defeated Charles Cotesworth Pinckney, the candidate of the Federalist party, which was quickly losing ground. After the Madisons moved into the White House in 1809, both Dolley and James began working in their own unique ways to bring about compromises in a Congress that was divided in how it wanted to approach the ongoing European conflicts. James Madison mollified various political factions in his cabinet member selection, although it left him with a lackluster cabinet that he gradually replaced with more competent individuals. Madison also attempted to balance the demands of Henry Clay’s War Hawks, who wanted an immediate war with Great Britain.
Similarly, Dolley put all her powers of charm and diplomacy into turning the White House into a place of hospitality, where politicians and their spouses could come together to have civil and even pleasant conversations, despite being on opposite sides of an issue. Guided by Dolley Madison’s hand, the Executive Mansion achieved a happy medium between the too-stiff protocols of Washington and Adams and the overly-casual and male-dominated gatherings of Jefferson. Visitors to the White House felt warmly welcomed in what would become synonymous with the American way—a not-too-formal environment built on respect for each individual guest. 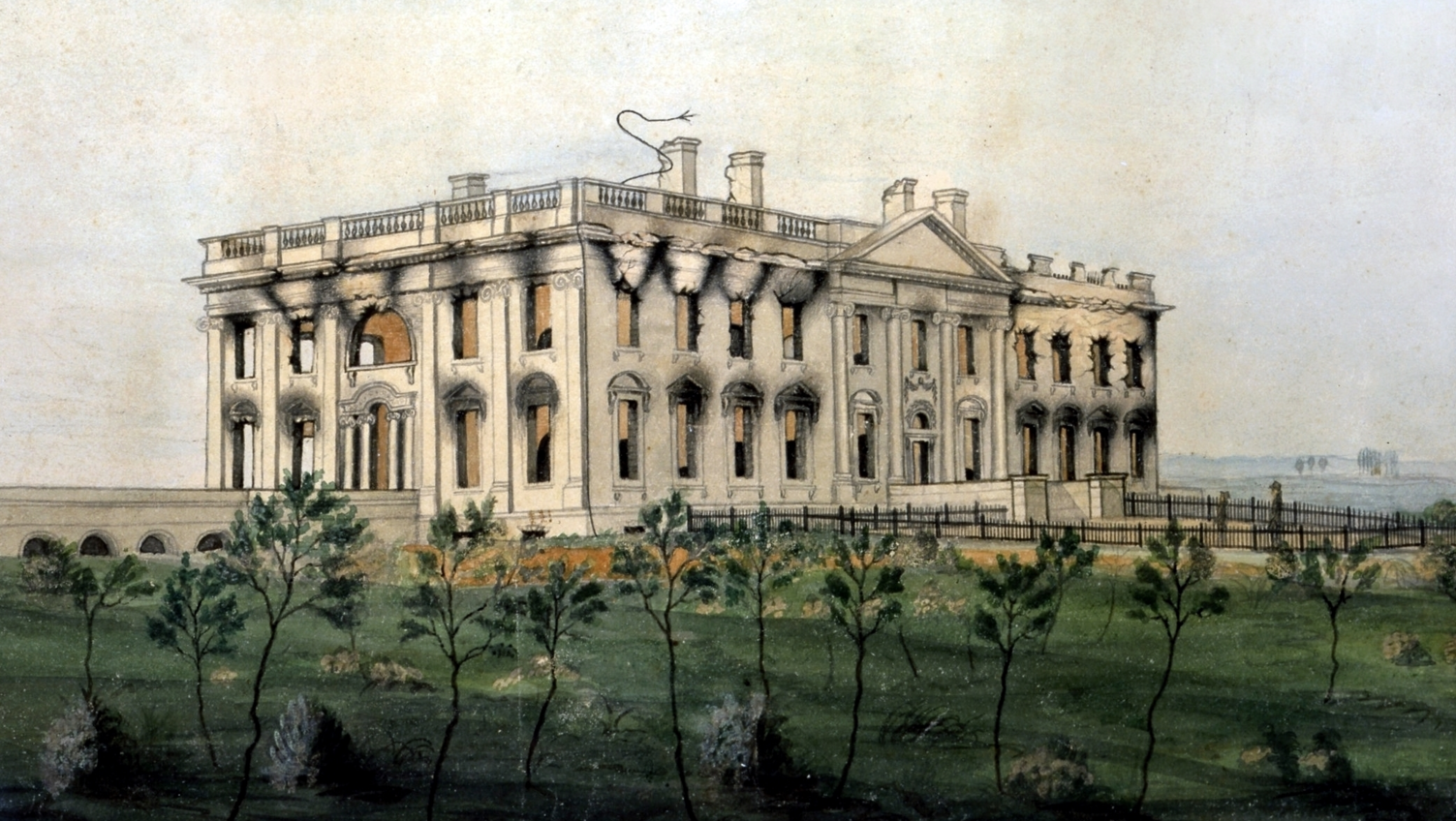 A depiction of the Executive Mansion after it was burned during the British invasion of the War of 1812.

A Nation at War

Ultimately, the conflict between Napoleon and Britain bled into American waters and onto American soil. Much of the country (and much of Congress) saw Britain’s actions—impressing American sailors into service and arming Native Americans to attack settlers—as those of a hostile nation, and what was nicknamed the “Second War of Independence” commenced.
Madison quickly realized that the work that he and Jefferson had done to dismantle the national bank and oppose a standing army had left the nation largely unprepared for a war. Segmented state militias and competing interests made for clumsy initial military efforts. In a move that shocked America, British troops invaded Washington D.C. and burned the White House. Dolley Madison made the now legendary decision to order valuables to be taken to safety before the British raided arrived—those valuables included the iconic Gilbert Stuart portrait of George Washington.
The tides turned, and battles on Lake Erie and at Baltimore's Fort McHenry leveled the playing field for the American military. When the War of 1812 ended in February 1815 with the Treaty of Ghent, the two governments considered it mostly a draw—no territory gained or lost, and no guarantee that American seamen's rights would be respected. But to the American people, it was an important moment that showed the world they were not to be trifled with.

The Madisons at Montpelier

James Madison left Washington with a solid legacy. He made important inroads in re-establishing the national bank, a working taxation system, and a standing military. The balanced central government he’d outlined in the Constitution was beginning to prove itself a success.
The Madisons finally retired to Montpelier in 1817 when James was 65 and Dolley was 49. An enthusiastic farmer, Madison applied the best practices he'd researched to raising wheat and tobacco, but weather, pests, and market prices conspired to keep the plantation's profits low. Madison's finances were further strained by the debts racked up by his stepson, John Payne Todd, a gambler and an alcoholic.
Throughout Madison's retirement years, he busied himself with editing his notes from the Constitutional Convention and other papers, as a gift to posterity and as a way to support Dolley after his death, through their publication. Madison worried about the question of slavery as well, engaging in multiple discussions with esteemed visitors about the possibility of colonizing freed slaves in Africa. While Madison may have considered freeing his own slaves, he decided to leave them to Dolley in his will, with the expressed desire that she not sell them without their consent (a wish she ultimately failed to honor).
The fourth President of the United States and the Father of the Constitution and the Bill of Rights died peacefully over his breakfast on June 28, 1836. He is buried in the family cemetery at Montpelier, where Dolley, his wife of 42 years, eventually joined him.