Open Thurs.-Mon. 9AM-3PM. We strongly recommend purchasing tickets in advance.Visitors Must Wear Masks Indoors.
Story
Trust, Training, and the Constitution
Montpelier leads the charge to educate police officers on constitutional law enforcement
13 Minute Read
From the Center for the Constitution

Protect and Serve
Law enforcement officers are some of the most visible constitutional protectors in the world. We ask them to pledge to defend and uphold the Constitution, but like most of us, it’s unlikely they have read the Constitution recently, if at all. Add to that the fact that much of their police academy training regards the Constitution as an impediment to efficient police work and suddenly officers find themselves in direct opposition to their oath instead of focusing on their utmost responsibility.
“Law enforcement officers take an oath of office to uphold the Constitution of the United States,” says Teresa Gooch, the Law Enforcement Division Director for Virginia Department of Criminal Justice Services (DCJS), the agency in charge of providing training to the Commonwealth of Virginia’s officers. “The best way an officer can uphold, support, and defend the Constitution is to have a thorough understanding of what is required of them.”

Tim Longo talks about why it's important for law enforcement officials to understand the Constitution
As with any government job, it’s imperative that law enforcement officials are deeply in tune with the rules and regulations that govern their work. In a field that’s heavily scrutinized and often dangerous, having a strong constitutional foundation is important when making split-second decisions. When emotions take over in intense situations it can lead to misjudgement, which can be the difference between the life and death of another person, or themselves. A poor decision, influenced by heightened emotion in the heat of the moment, can also be the difference between constitutional policing and an abuse of power.
Right now there is a crisis of trust between law enforcement and the public, and in some communities this is not a new phenomenon. Constitutional policing (or the lack thereof), is at the heart of this distrust. Every news cycle widens the chasm between police and the public, where citizens feel like their rights are being violated by the very people tasked with defending them. As sworn guardians of the Constitution, it’s vital that law enforcement officers have a deep and detailed understanding of how the Constitution informs their goal of protecting and serving the public. We don’t think it’s enough for cops to read the Constitution; we want them to understand it and most of all, believe it.
Stewart Harris explains how police officers are representatives of the people

We have to start somewhere
Montpelier’s Robert H. Smith Center for the Constitution began offering constitutional training for law enforcement in 2009, and today has grown into one of Virginia’s premier constitutional law enforcement training centers. To date, the Center has touched over 400 public safety officials, including officers from local, state, and federal agencies with the support of the Virginia DCJS. Along with necessary and relevant constitutional knowledge, officers receive continuing education credit for completing the three-day course. It has been approved by DCJS as providing in-service, or professional development, credit for officers who attend.
We offer two types of on-site training programs: an introductory seminar on the fundamentals of the U.S. Constitution, and an advanced course for higher level officers. The introductory Constitutional Foundations for Law Enforcement training includes a comprehensive overview of the Constitution, majority and minority rights
majority and minority rights
In Federalist No. 51, James Madison wrote, "In the extended republic of the United States, and among the great variety of interests, parties, and sects which it embraces, a coalition of a majority of the whole society could seldom take place on any other principles than those of justice and the general good..." In short, the Founders believed that even though the United States was to be governed by "majority rule," it should not do so in a way that would endanger or trample on minority rights. In the service of the public good, the rights of all, whether in the majority who has power or the minority who may not, must be protected.
, granting and controlling power, and deep dives into the 1st and 4th Amendments. The advanced course is intended for executive- and command-level staff who are deeply invested in developing agency policy. This training focuses on emerging constitutional issues, as well as philosophical questions about how the Constitution is challenged in modern situations their agencies may not have even anticipated yet. 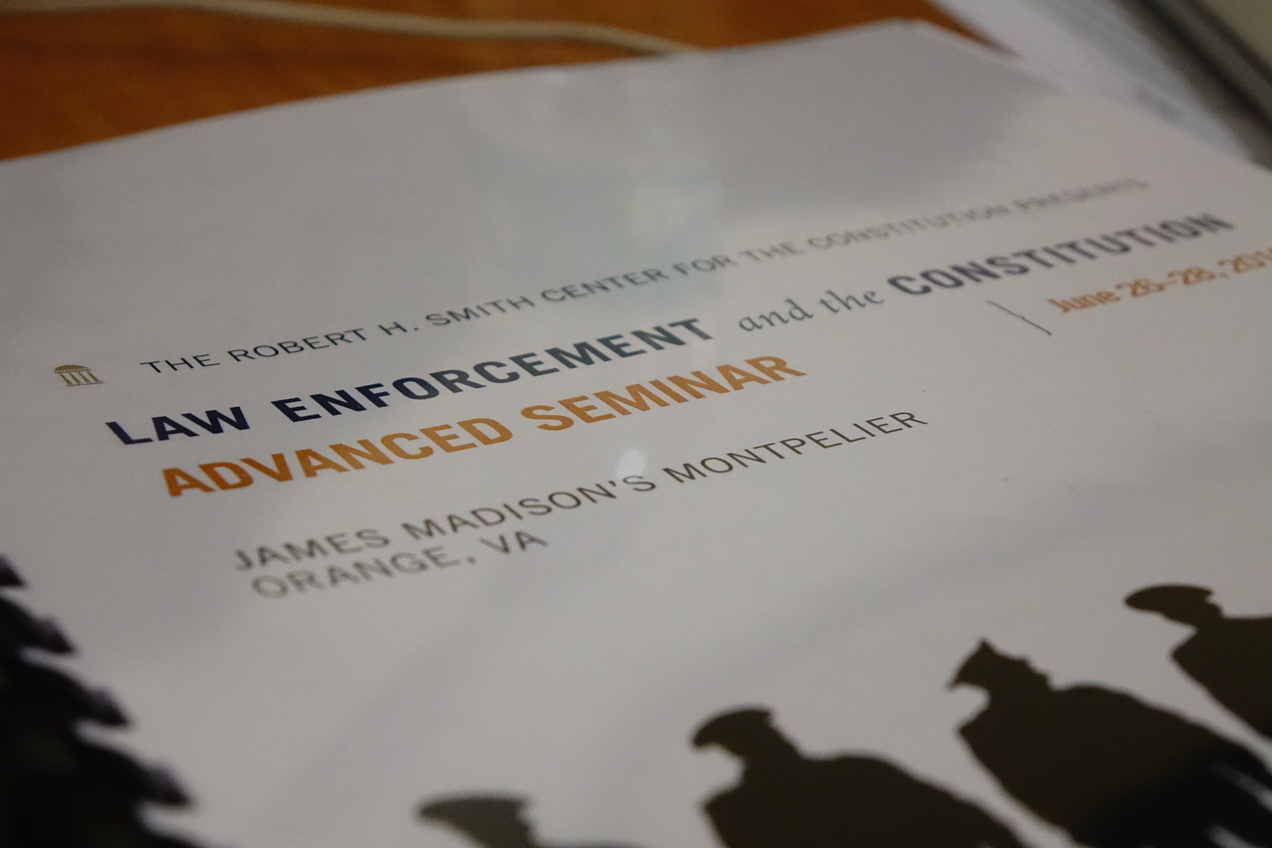 Courtesy of The Montpelier Foundation
Through a partnership with DCJS and the Virginia Office of the Attorney General, Montpelier’s Center for the Constitution has also developed the online companion to the “Constitutional Foundations for Law Enforcement” course. This online component is “an excellent opportunity for law enforcement officers to sharpen and reinforce their knowledge of the Constitution through a series of realistic scenarios that are directly related to their duties and responsibilities,” explains Teresa Gooch. To date, this course is the Commonwealth’s only online course dedicated to a comprehensive and deep exploration of law enforcement’s role in protecting constitutional rights.
Montpelier’s law enforcement curriculum relies on the perspectives of seasoned senior officers, prosecutors, and scholars to draw on their experiences in developing 21st-century policing models. The programs emphasize the role of law enforcement as being a guardians of the Constitution, rather than working against it. “If the community knows that you’re aware of what the Constitution says and that you’re committed to doing only the things the Constitution allows you to do, the community’s going to get behind you,” says David Rossman, Director of Clinical Programs in Criminal Law and Professor of Law, Boston University School of Law. “Your job’s going to be easier, and it’s going to be safer.”
Mike Herring talks about Constitutional policing
In addition to hearing from judges and former heads of major federal agencies, participants experience scenario-based constitutional challenges to get a sense of how different decisions lead to different outcomes. Because officers are expected to make split-second constitutional decisions every day, it is imperative that they test their understanding of the Constitution using realistic scenarios before they are put to the test in the field, when their decisions have real-life consequences.

"This is what we do every day of our careers. It should be mandatory for all LEOs. In almost 22 years of law enforcement, this is the first class I have attended that gave me a better understanding of the basis for the Constitution."

Constitutional Law Enforcement Participant
The immersive nature of studying the Constitution at Montpelier sets our programs apart from other training opportunities. Instead of sitting in large lecture halls or hotel conference rooms, participants are tasked with engaging each other and faculty on core American ideals at the very home of the architect of the Bill of Rights. Participants are housed on the property overnight, affording continued opportunities for discourse after the sessions have dismissed.
Michael Meyerson, DLA Piper Professor of Law; Director, Fannie Angelos Program for Academic Excellence, University of Baltimore School of Law; Courtesy of The Montpelier Foundation
Montpelier aims to be at the forefront of helping to repair the public trust in law enforcement in the coming years.
Tim Longo explains a Montpelier law enforcement seminar

The Future of Policing

How do we move forward in an era where biased policing seems to have become the rule, not the exception?
When community trust in its law enforcement erodes, this compounds already tense relations between some communities and police departments, particularly due to disproportionate targeting of minority groups. In fact, according to Gallup, only 49% of non-whites feel confident that the police will protect them from violent crime, compared to 60% of whites. There’s a catastrophic breakdown of the reciprocal relationship that should exist between law enforcement and the community, the image of law enforcement is tarnished, and it becomes a vicious, dangerous cycle of violence and mistrust.
A step towards solving this systemic issue, is to ensure public safety officers act constitutionally. To begin to rebuild trust between the community and the police, law enforcement must commit to understanding not only their constitutional limits, but take to heart that they are sworn guardians of constitutional liberty. The trust that an officer will exercise his or her power constitutionally is what legitimizes that power and the government itself. 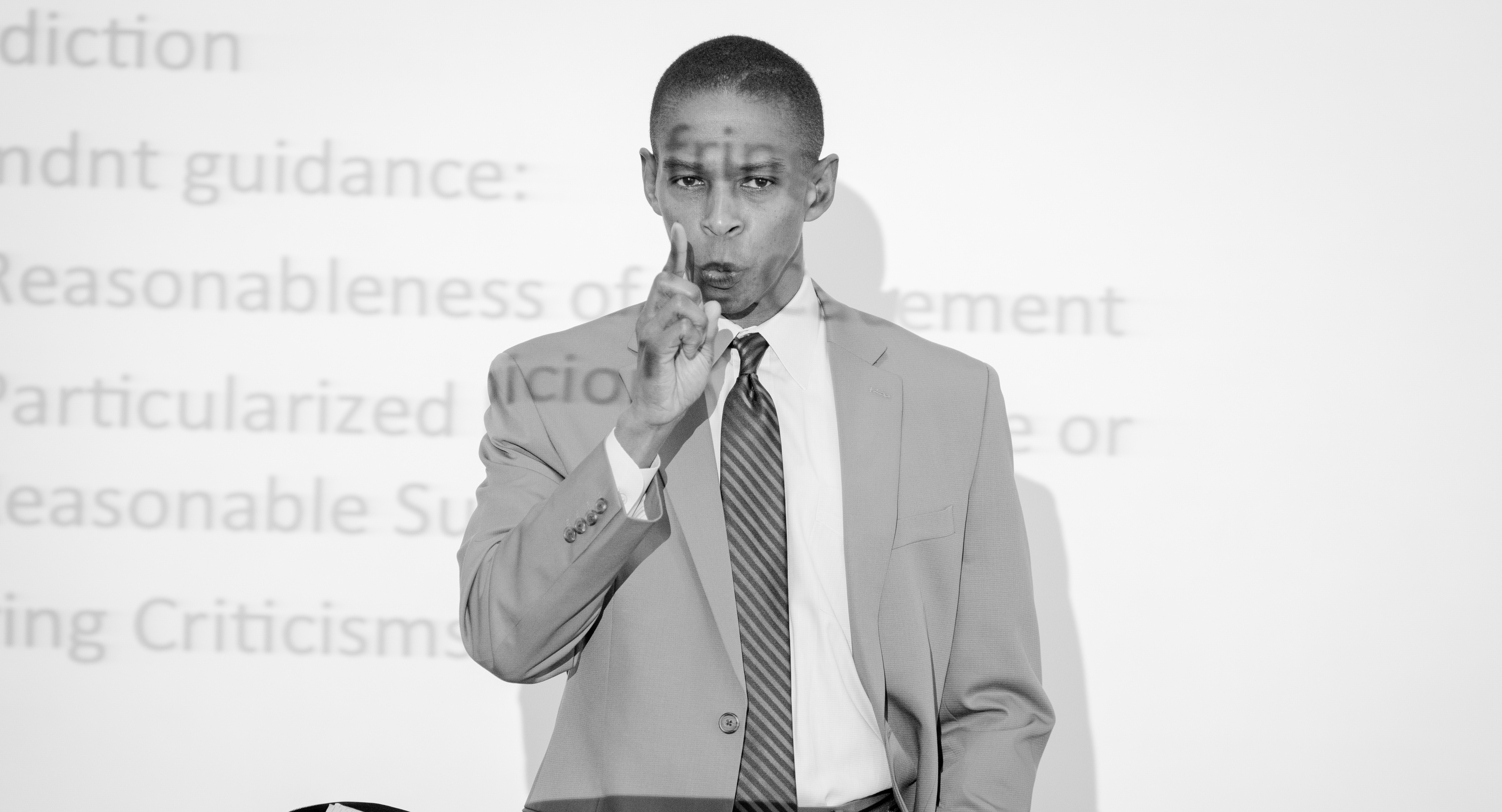